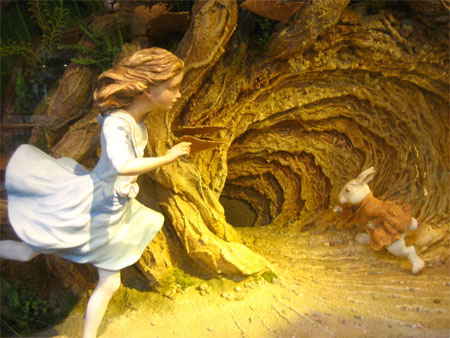 …Alice ran across the field after [the rabbit], and fortunately was just in time to see it pop down a large rabbit-hole under the hedge. In another moment down went Alice after it, never once considering how in the world she was to get out again… ― Lewis Carroll, Alice in Wonderland

On May 13, the Obama administration declared that every public school facility must give students access to all activities and facilities consistent with their gender identity.   The Obama White House wants our nation to follow Alice down the rabbit hole of transgender politics and bathroom insanity.

The majority of United States citizens are being forced to make radical and unsafe accommodations to the small number of individuals who suffer from gender confusion. As we shall see, other confused children and young adults are exploited by the propaganda of the transgender activists and become collateral damage in the culture wars.

Many have been surprised and alarmed at the rapid advance of this ideology of transgender rights. Yet, as with same-sex marriage, an increasing number of our fellow citizens see this as a natural progression in the development of a more inclusive, compassionate and just society.

How can we understand this rapid surrender to the ideologues and activists that are shaping our nation’s future?

It may be helpful as we mobilize to fight back against this madness, to step back and consider the broader issue of the origins and nature of sin and the critical role of abortion in creating a fertile soil for our current moral and spiritual confusion.

Justice Kennedy and the Serpent

Consider the words of Justice Anthony Kennedy in the 1992 Planned Parenthood vs Casey abortion case:

At the heart of liberty is the right to define one’s own concept of existence, of meaning, of the universe, and of the mystery of human life.

Justice Kennedy’s words echo back to that original rebellion against the providence of God:

The woman said to the serpent…God said, ‘You shall not eat of the fruit of the tree that is in the middle of the garden, nor shall you touch it, or you shall die.’” But the serpent said to the woman, “You will not die; for God knows that when you eat of it your eyes will be opened,and you will be like God knowing good and evil.” (Genesis 3-4)

The Genesis account reveals the origin of human sin and our ongoing temptation to reject God’s providence.  Kennedy’s comments suggest a perverted understanding of the nature of the “heart of liberty” as a type of deification of the autonomous self (“you will be like God.”)

The Transfigured and Disfigured Christ

Kennedy’s concept of human liberty presents a sharp contrast to the words of Jesus at the last Passover with his beloved apostles:

This is my body, given up for you.

And in the Garden of Gethsemane before his arrest:

Not my will Father, but your will be done.

Sin disfigures the human person and darkens the mind, emotions and conscience…but also the body.

The one who was transfigured in blinding light on Mount Tabor, very soon after would be disfigured beyond recognition by our sins. Jesus embraced his mission to heal the wounds of the human family inflicted by the serpent, and reconcile us to the Father.

The movie the Passion of the Christ and a close study of the Shroud of Turin, reveal in graphic and shocking detail the extent of the physical damage caused by the beatings, scourging, and crucifixion of Jesus. In the sadistic cruelty and humiliation inflicted on the sacred body of Jesus, we see how sin disfigures the image of God made flesh.  Sin has a similar effect on each of us, with effects both visible and hidden.

The Disfigured Body in the Abortion and Transgendered Movements

In the Genesis account we see that the temptation of the serpent was a carefully crafted lie.  His hidden agenda was to attack the intimate and holy relationship between man and woman and also the relationship with their Creator. The consequences of sin are confusion, disharmony, and spiritual and physical death.

Abortion, like the serpent’s temptation, was also founded on carefully crafted lies. The late Dr Bernard Nathanson, a former abortionist, and one of the founding fathers of the abortion revolution prior to his conversion, shares the truth:

We fed the public a line of deceit, dishonesty, a fabrication of statistics and figures. We succeeded [in breaking down the laws limiting abortions] because the time was right and the news media cooperated. We sensationalized the effects of illegal abortions, and fabricated polls which indicated that 85% of the public favored unrestricted abortion, when we knew it was only 5%. We unashamedly lied, and yet our statements were quoted [by the media] as though they had been written in law.’ (quoted in John Powell, Abortion: the silent Holocaust. Tabor, Allen, Texas. 1981.)

This campaign of deception set the stage for 1973 Supreme Court decision that legalized the widespread poisoning, dismembering and desecration of unborn children through all nine months of pregnancy.

The Planned Parenthood videos released by the Center for Medical Progress reveal the cold and calculated darkness that, over time, disfigures the hearts and minds of those immersed in this culture of death.

“I’d say a lot of people want liver. And for that reason, most providers will do this case under ultrasound guidance, so they’ll know where they’re putting their forceps. The kind of rate-limiting step of the procedure is calvarium. Calvarium—the head—is basically the biggest part.” Nucatola explains, “We’ve been very good at getting heart, lung, liver, because we know that, so I’m not gonna crush that part, I’m gonna basically crush below, I’m gonna crush above, and I’m gonna see if I can get it all intact.” (LifeNews)

Like the abortion rights revolutionaries, the transgendered movement is prepared to lie, manipulate information and language, and mutilate and sacrifice our vulnerable children and families to advance their radical agenda.

Dr. Kathleen “Kelly” Levinstein, PhD, is a Professor of Social Work at the University of Michigan, Flint.   Her research and advocacy work includes human and civil rights violations against the autistic community.

Dr. Levinstein shares a tragic and cautionary tale about the vulnerability of children with autism to the radical agenda of transgender activist in this account about her daughter who has undergone transgender medical transition:

My daughter, who is on the autism spectrum -When she was 16, she began watching a TV show called “Degrassi,” which featured an FtoM character. After a few weeks, she announced that she was not actually…lesbian, as she had previously said, but was in fact trans. She started attending a local PFLAG where she met many trans people, including a number of FtoM trans teenagers who were raving about a certain “gender therapist who gave my daughter the go-ahead to have a bilateral mastectomy after only two sessions. This gender specialist never reviewed any of the Special Ed records or spoke to my daughter’s previous therapist, who had known her for a decade.

The gender therapist (whom I believe has an unholy financial alliance with the surgeon) gave my daughter (then 18 and one day) the go-ahead for the $30,000 surgery (covered for all university employees and their families where I work). My daughter is now on testosterone (which she clearly is unable to evaluate the risks and consequences of)…

She has been taken advantage of. Healthy organs were amputated. This is insurance fraud, poor clinical practice, a violation of APA standards, unethical and unjust. It is a crime not just against women, but particularly against disabled women.

So many of these young women who are “transitioning” are also autistic.

Healthy organs of this autistic young woman were amputated.

Planned Parenthood harvests the healthy organs of unborn little boys and girls torn from the womb of their mothers.

The further we are removed from our moral and spiritual Judeo-Christian heritage and the absolute providence of our Creator over human life, the further we travel down the rabbit hole into cultural chaos and madness.

“We have no government armed with power capable of contending with human passions unbridled by morality and religion. Our Constitution was made only for a moral and religious people.  It is wholly inadequate to the government of any other.” – Founding Father John Adams

The sexual revolution marches on emboldened by its victories to spread sexual immorality and abortion around the world. The goals of the revolution expand to redefine and deconstruct what it means to be human, male and female.

Now for Some Very Good News

After over 20 years in ministry around the world for those suffering after abortion, we have discovered some common themes in the healing journey. Abortion is a deep wound that intimately hurts women emotionally, spiritually and physically. When they attend a safe and effective healing program like Rachel’s Vineyard, this deep wound is cleansed, and the power of God begins to heal and renew broken hearts and troubled souls. They grieve and reconcile with God and their unborn children.

Men are also wounded by participating in the death of their unborn children. Their secret suffering is often rooted in the failure to defend and protect their son or daughter.  This can weaken them later as men and fathers.  The passivity of many men in our country to the advancing radical agendas of the same sex, abortion and transgender movements may be connected to their unresolved shame, grief and guilt from their abortion loss.    Reconciliation and healing strengthens men to embrace their role as spiritual leaders in their families and communities, rooted in Christ’s example of loving service and sacrifice for those entrusted to their care.

Just as abortion darkens the mind and conscience, healing the intimate wounds of abortion brings renewed light and moral clarity.

As women and men continue that process of emotional and spiritual growth and healing after abortion, they can better discern God’s will for their lives. With joy and gratitude, and a renewed and vibrant faith, they experience a call to loving service to others in their churches and communities.

There is a great harvest across our nation of those wounded by the Shockwaves of Abortion, and waiting to hear a message of liberating truth rooted in charity, compassion and love.

This humble but powerful army of those reconciled from their abortion loss can unleash a flood of grace upon this nation, and push back against the culture of death.

Its time to stop our nation’s descent down the rabbit holes of sexual revolution and transgender madness.